Kevin Moore’s military training served him well in working through the rezoning issues encountered while moving his brewery from Fort Saskatchewan into Edmonton last year.

When he signed the lease, he failed to realize that his new space was a hop, skip and jump — five metres, in fact — outside of the zone already designated for breweries, wineries and distilleries.

But Moore buckled down and dug deep — thousands of dollars deeper than planned — and finally opened the doors to Two Sergeants Brewing Co. in December.

I’ve not heard much buzz about this brewery, and I’m confused as to why. Perhaps people expect it to be located in the Edmonton Brewery District in the Oliver neighbourhood and not hidden behind it, facing a cemetery. Or perhaps its lack of indoor string lights and trendy Edison light bulbs isn’t making it cool enough for Instagrammers.

The room is cavernous and, admittedly, does lack some ambience. It’s hard to be hipster in a decor that combines a fiesta feel with Aunt Doris’s DIY project run amok. But I can guarantee that out of the mish-mash of multi-coloured chairs, you’re bound to find a comfortable one for you and your laptop, or a whole bunch to accommodate a dozen of your closest, beer-loving friends.

As well, after tasting an entire flight of Two Sergeant’s beer, I am hard-pressed to find one that I don’t love, or at least like a whole lot. Especially when that flight costs $5 (on Tuesdays) and a pint on any given day can be had for $7.50.

To add to the draw of tasty craft beer in a comfortable setting, the food is creative and well-executed.

People. What are you waiting for?

I’d recommend the wings to start. Nicklin brines the locally sourced bird parts in Two Sergeants beer before they hit the fryer. A dusting of sea salt and cracked black pepper are the only seasonings needed to let the flavour shine but you do have the option to dip into either a house-made dill buttermilk ranch, a beer BBQ sauce or Frank’s Red Hot.

You can nosh on simple food like fries or a smokie with house-made relish and whole grain mustard, served with your choice of house-cut fries or salad. A falafel “dog” is available for vegetarians.

Every brew pub should have nachos on offer, and I was intrigued by Two Sergeants’ “Not Your Average Nachos.” Because I am so done with average nachos.

Freshly made pico de gallo and sour cream are served on the side. Instead of standard cheddar or a mixture of melted hard cheese, these chips are dressed in a beer cheese sauce made, of course, with the brewery’s beer. 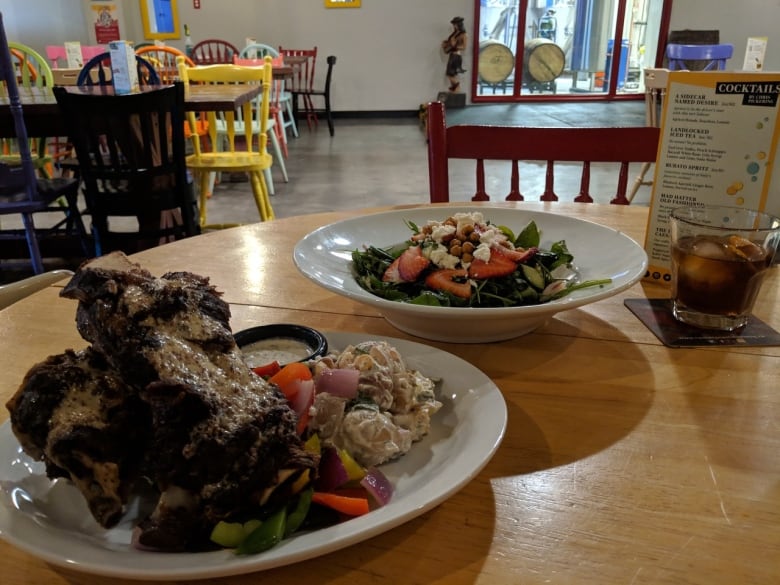 The ambience may be lacking inside Two Sergeants but the food more than makes up for it. (Twyla Campbell)

The beer cheese sauce is light and dries too quickly when exposed to the cooler air outside the kitchen. As a result, its texture gets chalky and it lacks the fatty, salty gooeyness you get in a melted mound of freshly grated cheese.

Chef Nicklin is wonderfully creative but sometimes a classic dish like nachos doesn’t need to be trifled with. Just give us the real cheese.

I have no complaints about the braised beef ribs.

Two meat-laden bones arrive steaming hot beside colourful crisp, sautéed vegetables and a potato salad that you actually want to eat instead of pushing out of the way. One bone measured seven inches long and was so thick with succulent meat, I needed two hands to hold it.

Nicklin bastes the beef with a white sauce enhanced with a Two Sergeants beer. The sauce has a piquant mustard-seed bite to it, like the vinegar sharpness typical of North Carolina barbecue.

I wouldn’t mind a smokier, robust sauce. But I’d fight anyone who dared to take those bones, prepared as they were, from my grasp.

The menu has changed somewhat since my first visit in March and that’s a good sign.

The chef is committed to using seasonal, fresh ingredients and that means switching things up based on what’s available — not foods coming out of a box or freezer, which is too often the case when it comes to pub food.

Two Sergeants should become the first neighbourhood pub that comes to mind when friends ask if you want to grab a beer.

Need another reason? Brunch is served Saturdays and Sundays from 11 a.m. to 2:30 p.m., with peppercorn gin Caesars one dollar off the regular price.

You can hear Twyla Campbell’s reviews on Edmonton AM every second Friday. You can also see more of her reviews on her blog, Weird Wild and Wonderful, and can follow her on Twitter at @wanderwoman10.