It’s a crowd-pleasing party trick: Cut a grape in half, pop it in the microwave, hit “start” — then sit back and be dazzled by the grape balls of fire.

Naturally, the resulting bright sparks and balls of light, sometimes accompanied by a buzzing sound, are popular on YouTube. (Although researchers say there are good reasons not to do this too much at home.)

What’s even more amazing is that the “fire” isn’t actually fire — it’s a state of matter called plasma that’s made up of ions and free electrons that aren’t tied to atoms or molecules (unlike electrons in a solid, liquid or gas). And while plasma is abundant inside stars and science-fiction spacecraft engines, it’s uncommon in our homes, except inside fluorescent light bulbs.

It’s not that hard to generate plasma from metals like the mercury vapour in a fluorescent light bulb or even a scrap of aluminum foil in your microwave. But why does it work with grapes?

Canadian researchers say they’ve come up with an answer, which they published this week in the journal Proceedings of the National Academy of Sciences.

The first key is that grapes are mostly made of water. Water bends microwaves and shortens their wavelength significantly because it has a high refractive index.

A trap for unsuspecting waves

The second is that half a grape is just the right size “so that you can fit essentially one microwave wavelength inside the grape,” said Pablo Bianucci, a physics professor at Concordia University in Montreal, who co-authored the paper.

The single microwave gets trapped inside the grape, where it bounces back and forth, heating up the grape half from the inside out — just the opposite of how foods normally heat in a microwave.

If another grape half is nearby, the trapped microwaves can hop between them, generating a strong electromagnetic field. That provides the energy for the electrons and ions to escape from the molecules inside the grapes and the air, producing a plasma.

Bianucci said similar effects had been observed with much shorter wavelengths of light than microwaves in things much smaller than grapes, such as nanoparticles.

“Nobody thought this could be happening with microwave ovens and fruit,” he said, but in principle it could happen in any wavelength, in an object of the right size, made of a material of the right refractive index

In fact, there’s nothing special about grapes — any two objects made of water and some ions that are about a centimetre in length should work. The team even tried quail eggs and special beads made of a material called hydrogel that is 99.9 per cent water.

“We’ve done cherries and olives and blueberries and lots of other stuff,” said Hamza Khattak, lead author of the new paper. “You can even do one hydrogel bead and one grape, and this still works.” 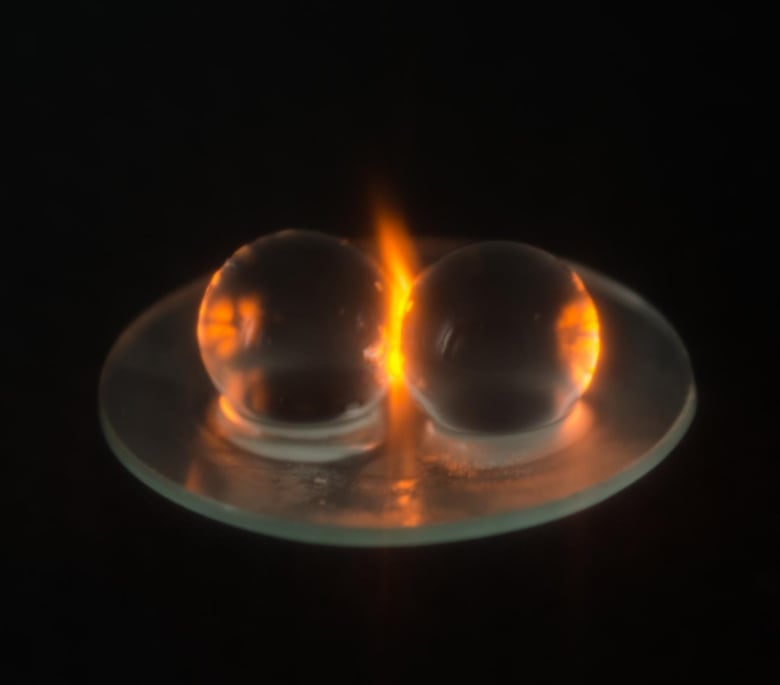 Plasma forms between a pair of hydrogel beads, which are 99.9 per cent water and about a centimetre in diameter — similar to a grape. (Hamza K. Khattak)

The research was started in 2013 by Trent University physics professor Aaron Slepkov, who had been fascinated by “microwave grape plasma” for nearly two decades after learning about it as an undergraduate student at Brock University in St. Catharine’s, Ont., Bianucci said.

Slepkov searched for a scientific explanation, but only found one proposal on the internet that had never been verified. It suggested the grape skin connecting the two halves was acting as an antenna, something Slepkov’s team proved was not the case, since the grape skin was not necessary to generate a plasma.

In 2017, Khattak was an undergraduate summer student in Slepkov’s lab, working on another project. But Slepkov wanted to make use of his photography skills to get to the bottom of what was going on in the microwave, using both high-speed cameras and thermal imaging, which shows different temperatures as different colours.

“It’s so interesting that I had to work on it,” Khattak said.

The photography ended up being tricky — to get good images, the researchers had to replace the microwave’s plastic door with a breezy wire mesh door. They also had to tweak the lighting. They tried many different designs.

“Sometimes it doesn’t work, so you get a lot of destroyed microwaves,” said Khattak, now a master’s student in physics at McMaster University in Hamilton, Ont. 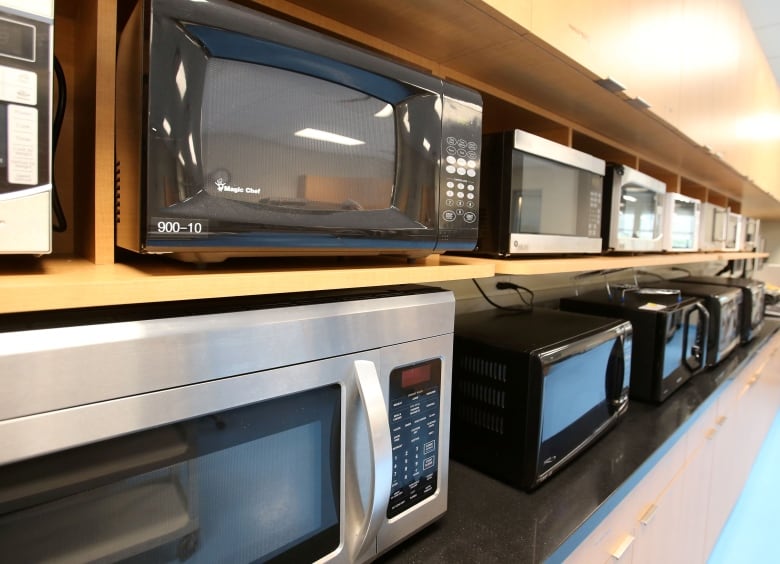 Various models of microwaves sit in a testing room at the Nestle Development Center in Solon, Ohio. The researchers went through about a dozen microwaves over the course of the experiment. (Aaron Josefczyk/Reuters)

The experiment itself also seems to damage the microwave-generating magnetron inside the appliance over time, although the researchers aren’t sure why that happens.

In all, the team went through about a dozen microwaves ovens.

Having seen that, Bianucci, who did computer simulations to verify the physics behind Khattak and Slepkov’s observations, never tried the trick with his own microwave.

“I still use it a lot, so I’d rather not have it being harmed,” he said, although he admitted his two children, nine and five years old, now want to see the trick live.

For those who want to try this at home, Khattak says, “Go for it.” But he warns not to do it too much to avoid damaging your microwave over the long term.

“If you see the plasma sort of escaping the point of contact between the two grapes and going to the top of the microwave, definitely turn it off, because it will melt a hole in the top of your microwave.”