The tornado that ripped into Windsor Curling Club 45 years ago sent shards of cement into Louise Gulak’s back.

While she made it out alive, her husband Keith Allen did not. Every year on the anniversary of his death, Gulak remembers that day.

This year is no different.

Her voice shakes while describing the events of the night, the shock, and the difficulty she had moving on with her life to raise three children, who were 11, 14 and 17 at the time.

“Some people probably think, well it can’t be that emotional 45 years later, but to me it is,” said Gulak.

A tornado destroyed the Windsor Curling Club and killed nine people in 1974. 1:45

Allen is one of nine people who were killed by the F-3 tornado that touched down in Windsor on April 3, 1974. Eight people died the day of, and one person died months later.

It tore down the wall of the club and lifted off the roof. The tornado is considered Canada’s 6th deadliest.

‘I think my dad is dead’

That day, Barbara Hungler was returning home from a fabric shopping trip in Blenheim with her husband when she got a feeling that something terrible had happened to her father.

“I remember, I looked over at John and I said, I think my dad is dead,” she recalled.

Hungler’s father, Donald Little, was among the victims. Her mother was there as well, but she was safe from the disaster.

The details are still fresh for Hungler, who lost her father 45 years ago. 2:26

A person who arrived at the scene was Walter McCall, a public relations manager at Chrysler at the time. The organization had a close working relationship with the curling club then, and many Chrysler workers would go curling at the facility.

“I remember it was a wild, windy night,” McCall said. “It was a very vicious storm, strong burst of wind, but nobody had any inkling it would result in something as serious as this.”

By the time he arrived at the curling club, the streets were already filled up with emergency responders. McCall described a coordinated rescue and removal effort amongst EMS, fire and police.

“A wall had collapsed and a lot of people were inside the structure, and had to be attended to,” he said. “The roof peeled away and kind of flew into the parking lot here.”

Windsor-Essex have seen many tornado touchdowns and sightings over the years. Here are some of the most destructive. 1:00

Hungler finds looking at photos from that day difficult.

The people who died that day were in their prime, she said, all in their 40s to 50s, and a lot of families were affected by the disaster that day.

“There was a tremendous outpouring of grief from the whole city and we all went from funeral home to funeral home, because we all knew each other,” said Hungler.

‘It was just life-changing’

Over the years, she had questioned again and again what could have happened differently that night. 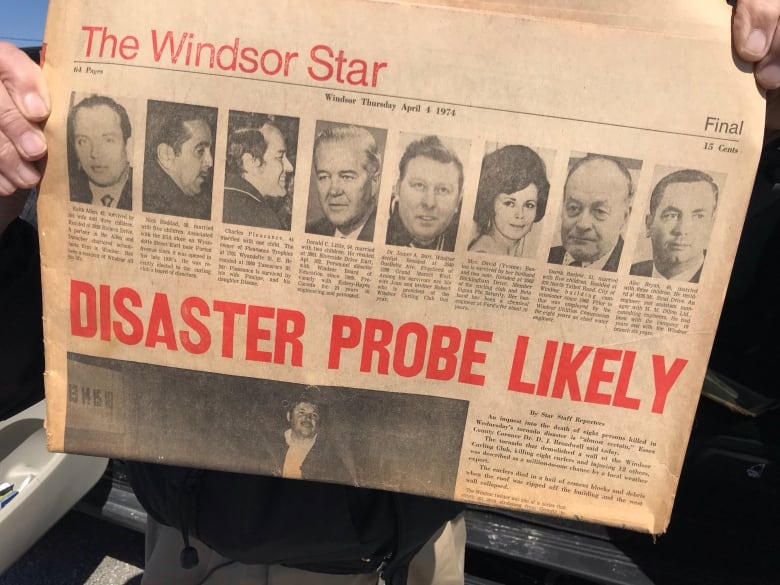 Perhaps she could have done something differently, and she and her husband wouldn’t have gone curling, she said.

And if the tornado had struck even five minutes later, it would have been her and the other women in the club who were lined up against the wall.

She remembers not believing that her husband was crushed underneath the weight of the fallen wall — not until she saw the rubble and the damage the following day.

“Mostly these things are forgotten and so be it, it probably should be that way,” said Gulak.

“But to me, it was just life-changing and it took a long time to get through all that.”