Quebec’s Public Security Ministry is warning that the hydroelectric dam at Bell Falls on the Rouge River in the western Laurentians region is at imminent risk of failure.

The ministry is advising anyone down river from the dam to evacuate the area immediately and stay far away from waterways, valleys and low-lying areas.

Quebec provincial police say the dam has reached its capacity, but as of 4 p.m. Thursday it had not broken. Around 30 residences are being evacuated, and some 250 people are being ordered to leave the area.

If the dam ruptures, it will take around 45 minutes for floodwaters to reach those buildings under the evacuation order, police said.

Police said they are using “all the means at their disposal to ensure people’s safety.” 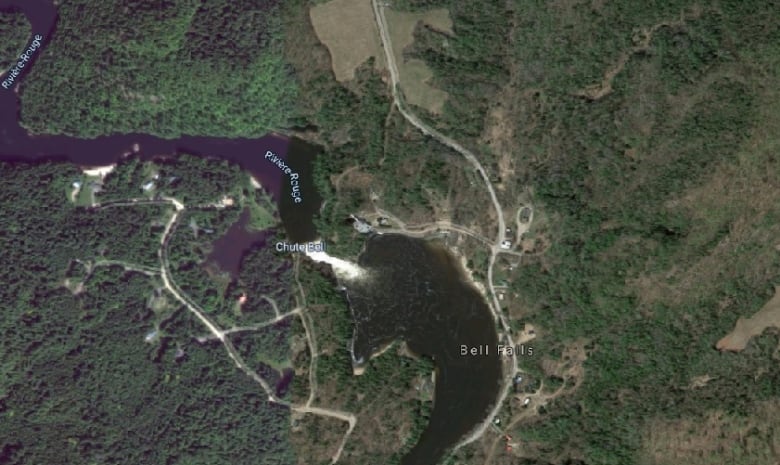 The hydroelectric dam at Bell Falls, on the Rouge River, is at risk of failing due to spring flooding. (Google Maps)

“We are asking residents of areas affected by forced evacuations to co-operate with the authorities,” the  Sûreté du Québec said on Twitter.

Francis Labbé, a spokesperson for Hydro-Québec, said the 10 MW dam was built to withstand a flood that experts would expect to occur once in 1,000 years.

“We’ve reached that level, and we expect a lot of precipitation in the next 24 to 48 hours,” Labbé said. “More precipitation — more than the dam was designed to hold.”

Labbé said the dam isn’t certain to rupture, but with current water levels as they are, the evacuation order is required.

Transports Québec has closed Highway 50 in both directions at Grenville-sur-la-Rouge. That highway, which links Gatineau to Highway 15 at Mirabel, crosses the Rouge River about 16 kilometres downstream from the dam, where the Rouge empties into the Ottawa River.

The evacuation order for the Grenville-sur-la-Rouge area comes as large swaths of Quebec and neighbouring eastern Ontario are dealing with spring floods.

Ottawa declared a state of emergency on Thursday, while Montreal warned water levels could rise even higher this weekend.

Bell Falls, or Chute-Bell, is about 23 kilometres northwest of Grenville-sur-la-Rouge, Que., which is on the north side of the Ottawa river, across from Hawkesbury, Ont.